This disorder is caused by blockage of a retinal vein leading to hemorrhaging and leakage of damaged blood vessels in the area of the blockage. Most retinal vein occlusions are associated with arteriosclerosis (hardening of the arteries) causing compression of the affected vein by an adjacent artery. Patients experience varying degrees of visual loss depending on the location and severity of the vein occlusion. If the macula (the central retina) is not involved, the patient may be asymptomatic and unaware of the problem.

There are two categories of retinal vein occlusions: 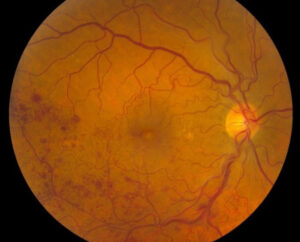 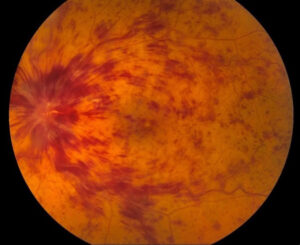 It is first important to determine and treat the underlying condition leading to the retinal vein occlusion. A thorough systemic evaluation, often with the assistance of the patient’s primary care physician, is essential to identify modifiable risk factors of arteriosclerosis such as uncontrolled hypertension, hyperlipidemia, etc. In younger patients, an evaluation for sources of abnormal blood clotting may be recommended. The retinal vein occlusion itself is not treatable but may resolve if an underlying condition such as hypertension is identified and treated.

Secondary complications of vein occlusions, most commonly macular edema and abnormal retinal and iris blood vessel growth (neovascularization) can be treated with intravitreal injections of anti-vascular endothelial growth factor medications. Prior to the availability of these medications, patients often experienced significant loss of vision from this disease. However, now these medications are vital to maintaining good vision and are considered the standard of care. Laser treatment remains useful in selected cases.