The retina is the light-absorbing layer which lines the back wall of the eye and is responsible for making the “picture” much like the film in the camera. When it is detached from the back wall, it is separated from its blood supply and is unable to function properly and can result in varying degrees of loss of vision. 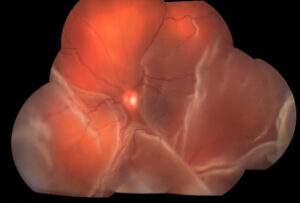 The typical symptoms of a retina detachment include sudden onset of new floaters, flashing lights, and a shadow or curtain in the peripheral vision. In some cases, patients may not have any symptoms until there is significant progression of the detachment.

There are several conditions that increase the risk of developing a retinal detachment. These include nearsightedness (myopia), previous eye surgery such as cataract surgery, history of eye trauma, retinal detachment in the fellow eye or in a family member.

Most retinal detachments are caused by the separation of the vitreous gel which fills the core of the eye and naturally separates between the ages of 50-70. The vitreous separation can tear the retina and allow fluid to pass underneath the retina, thereby detaching it from the back wall.  If tears are detected prior to development of a retinal detachment, they may be treated with laser to prevent the detachment from occurring.

Unfortunately, most retinal detachments require surgical intervention. There are three main treatment options for retinal detachment and sometimes a combination of approaches is utilized depending on the characteristics of the detachment.

It is important to report any new visual symptoms of floaters, flashes, or peripheral shadows to an eye care professional immediately to increase your chances of preserving vision.